Posted at 10:01h in Our Drinking Water by Daniel

The father of three said he is totally opposed to paying water charges and is prepared to be arrested if it comes to it. 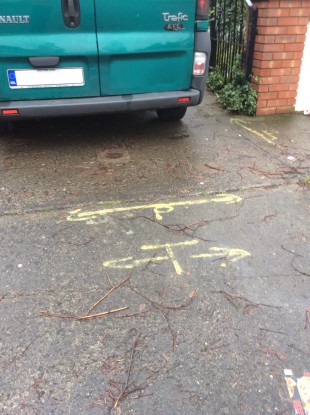 O’Donnaille has part of the path blocked off to prevent workers from putting the meter in.

A FATHER OF three who is strongly opposed to the introduction of water charges has turned away workers installing meters 12 different occasions in the last seven weeks.

49-year-old Alan O’Donnaille from Clonsilla in Dublin told TheJournal.ie that he was first sent a notification about his water meter in early December and he asked Irish Water to provide him with seven different documents including details of health and safety and insurance. He also asked them to give him documentation that allows workers to block off his access to the public road.

Some seven weeks later, none of this information has been passed onto him and just yesterday a group of workers were back with diggers to start the work. O’Donnaille again refused his permission and they were forced to leave. This was the twelfth time workers arrived at the Dublin man’s house and were forced to leave without installing the meter, though every other meter in the street and immediate area have now been put in.

On one occasion, he said workers threatened to get gardaí involved and while communication so far has been “very courteous” he said he is prepared to be arrested if it comes down to it.

“I feel very strongly about it, I mean, if the gardaí arrest me here, that’s what will happen,” he said.

“I don’t want a water meter, I’m totally opposed to it because it’s a completely unjust tax – this is an act of civil disobedience against an unjust law.”

People are being browbeaten and fooled into thinking this charade can go ahead and they’re are just bulldozing through it. It makes no sense and I think it’s just designed to break people’s will.

At this stage more than 80,000 water meters have been installed despite fierce opposition though public outrage has increased with recent revelations about overstaffing and consultancy fees at Irish Water.