These superb water filters are currently sold and used in over 150 countries worldwide.

Our main interest is always in the environment, health and in particular the quality of our drinking water. This subject to us is huge as water is the most important thing that we put into our bodies. The quality of our drinking water should be the first thing we think of when moving into a new house or workplace, but often it is overlooked and left on the long finger, why? Recent studies have found microplastics in tap and bottled water, we don’t know how long bottled water is lying stagnant in plastic bottles for. We know our tap water takes a journey through disinfectants and lead pipes. Our standard system starts from just 195 euro  providing fresh, CleanWater all year round.

Our mission is to supply this superb filter to every household in Ireland and then all over Europe, with a lifetime filter guarantee and a first class after sales service and in doing so eliminating plastic waste from plastic water bottles.

To date the feedback from customers has been 100% positive, please check out our Google reviews g.page/cleanwater & read client testimonials

“Offensive to the sight, disgusting to the imagination and destructive to the health.

This was how London drinking water, which was drawn from the Thames, was described in a pamphlet published in 1827. The Thames was heavily contaminated with raw sewage; cholera and typhoid epidemics were rampant. Doulton were perfectly placed along the river Thames to deal with these problems 1835 Queen Victoria recognized the health dangers in her drinking water and commissioned Doulton to produce a water filter for the Royal household.

In consideration of her pleasure with the new device, Queen Victoria bestowed upon Doulton the right to embellish each of its units with the ROYAL CREST.

She was so happy with her filter Henry Doulton was knighted in 1877. 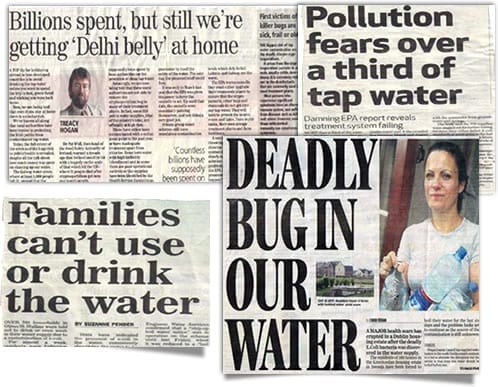 What Are Your Options?

Do nothing and drink tap water

Our Ceramic under sink water filters are are long lasting, self-sterilising and use 100% natural elements for filtering. The filter does not remove essential minerals from water that are beneficial to health.

We offer a wide range of office coolers and water dispensers which use state of the art water filtration systems so you can ensure your staff have safe and healthy drinking water whilst in the work place.

Our water supply has been supplemented with fluoride for years, despite the fact that controversy still rages about its safety. Countless studies point to evidence that it can be dangerous to your health.

Check out our full range of water filtration products, water filtering solutions and aftercare which are designed to give you the freshest and healthiest clean drinking water possible in Ireland.

More Filters
COVID-19Deliveries will not be affected