Does a Drink of Water Make Kids Smarter?

Home > Our Drinking Water  > Does a Drink of Water Make Kids Smarter?

26 Jun Does a Drink of Water Make Kids Smarter?

Posted at 19:34h in Our Drinking Water by Daniel

Most children arrive at school in a state of mild dehydration that may negatively affect scholastic performance. Preventing cellular dehydration is integral to hormonal, immune, neurological, cardiovascular, gastrointestinal, muscle and skeletal function. So researchers recently set out to determine the hydration status of healthy children in the United States. Urine samples were obtained from groups of 9 to 11 year olds in Los Angeles and Manhattan on their way to school to see how they were doing. The study was motivated by recent studies in Israel showing children did not seem to be hydrated enough. But Israel’s in a desert, so they wanted to repeat the study under cooler and less arid conditions. It turns out the U.S. kids did just as bad as the Israelis. The urine from nearly two-thirds of the U.S. kids studied was considered too concentrated, an indicator that they were dehydrated. Why? They weren’t drinking enough water. Three-quarters of the kids did not drink water between the time they woke up and when they went off to school. 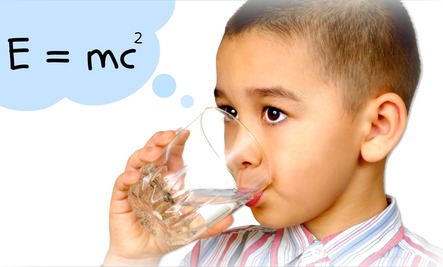 Studies show that children in a state of mild dehydration can benefit from drinking more water and may even improve their cognitive performance.

But most ate breakfast, so they must have been drinking something. The problem is that other beverages are not as hydrating. The levels of sodium, sugars, and amino acids in milk and juice can shrink cells and trigger the release of the hormone that spurs dehydration. So what, though? Is there any actual negative impact of mild dehydration on one’s ability to function at school? Historically, most of the studies on hydration and mental functioning were done on adults under extreme conditions, like having people exercise in 113 degree heat, or giving people powerful diuretics like Lasix and putting them on a treadmill. Most of the studies on hydration and cognitive performance have been performed on military personnel to evaluate soldiers’ ability to function in extreme circumstances. It is easy to imagine that a soldier fighting in the desert with a heavy rucksack and a protective suit must be physically and cognitively at his best. It is, however, very difficult to translate this knowledge to normal real-life circumstances. Three new studies changed that. They were simple studies. Researchers took a group of schoolchildren, randomly allocated them to drink a cup of water or not, and then gave them all a test to see who did better. And the winner was… the cup-of-water group. Conclusion: “The results of the present study suggest that even children in a state of mild dehydration, not induced by intentional water deprivation or by heat stress and living in a cold climate, can benefit from drinking more water and improve their cognitive performance.” So water worked for 2nd and 3rd graders, what about 1st grade? Same experimental design but this time instead of forcing kids in the water group to drink a cup, the water group was just given some water and told to drink as much they wanted, and again found significant improvement in the performance of various tasks, leading to the same conclusion: “ven under conditions of mild dehydration…children’s cognitive performance can be improved by having a drink of water.” The latest study that just came out is the largest to date.  It too found a remarkable proportion of children were in a state of mild, voluntary dehydration at the beginning of the school day and a significant negative correlation between dehydration and, for example, the ability to remember numbers. The researchers offered a randomized group some water, and those kids on average felt better and performed better. “To conclude… is an adverse state that might render the school day more challenging for children.” Even doctors often apparently fail to realize the connection. A recent survey found that healthcare professionals under-recognized the importance of proper hydration for mental health. Who would care enough about the importance of human hydration to even do a survey? A “Hydration Institute” founded in part by…The Coca-Cola company. These three new studies found drinking resulted in a significant improvement in cognitive performance, but not with Coke. And not with Ritalin or some new drug, either. Just plain water. Think how much drug companies could make if they could sell sugar pills but just tell kids to take the fake pill with… a glass of water. This is one of those groundbreaking findings (like my gargling video) that will likely never see the light of day because there’s no profit motive for promotion. We’re guaranteed to be assailed about all the new drugs and surgical advances because there’s big business behind getting the word out. But who profits from tap water? Or even broccoli for that matter? That’s one of the reasons I created NutritionFacts.org, to bring to light all the findings that would otherwise just get buried in medical library basements (or, increasingly, vast private databases). The water content of plant foods may help explain why those eating plant-based diets are, on average, so slim. Like fiber, water is a source of Nutrition Without Calories. See Dietary Guidelines: It’s All Greek to the USDA for a country with the guts to suggest water might be preferable to drinking soda. Juice and milk may not be as hydrating as water. What about tea? See my video Is Caffeinated Tea Dehydrating? What about Bottled Water vs. Tap?