Coconut water: all it’s cracked up to be?

Home > Our Drinking Water  > Coconut water: all it’s cracked up to be?

06 Nov Coconut water: all it’s cracked up to be?

Posted at 13:03h in Our Drinking Water by Daniel

Coconut water contains natural sugars and some important vitamins and minerals, but is it the wonder tonic the hype suggests? Katy Salter reports 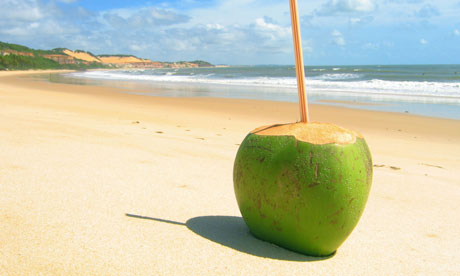 A green coconut on Praia do Madeiro beach, Brazil. Coconut water is now available in a can. Photograph: Alamy

The Brazilians have been drinking it for years. So have people in India, south east Asia, the Caribbean and anywhere else that the coconut palm grows. Now coconut water has been liberated from its natural container and packaged for sale in the rest of the world. America’s been quaffing it since 2004. Britain has come late to the party but here, marketed with crushing inevitability as a celebrity-endorsed natural sports drink, sales are growing fast: Vita Coco, which accounts for more than 9 of every 10 servings sold in the UK, is reporting sales up 122% year on year.

Then you’ve got Coke’s ZICO and smaller brands like Cracker Coco,Grace, Tiana, and Biona. Vita Coco, ZICO, Tiana and Biona use 100% coconut water, Grace uses 85% coconut water plus ordinary water, and some brands, such as Cracker Coco, use coconut water in a mixed fruit juice. You can even sup directly from the coconut, thanks to start-ups like Cocoface, which sells fresh young coconuts from Thailand at markets and online.

Coconut water is the liquid found inside young, green coconuts. It’s used in cooking too – Alice Hart cites it as a traditional ingredient in Thit Heo Kho Tau, a Vietnamese braised pork dish. “The coconut water is slightly sweet and balances out the salt in the braising liquid. You could also cook rice in coconut water, but dilute it with water or stock.” Whatever you do, don’t try substituting coconut water for coconut milk in recipes: unlike coconut milk, which comes from squeezing or grating the flesh of mature coconuts, the water contains no fat. “They’re entirely different ingredients,” says Hart. “It would be akin to saying sweetened skimmed milk can be subbed in for double cream.”

But it’s probably most popular as a drink. Fans prefer it to day-glo sports drinks, pointing to its lack of refined sugars and other additives, and it’s also gaining popularity as an alternative to juices and smoothies. “Coconut water is rich in potassium, which enhances the body’s ability to hydrate, making it perfect to drink after exercise,” says Dana James, a nutritionist. “People drink it as a hangover remedy for the same reason. The magnesium also helps to enhance hydration.”

The natural sugars provide energy, and nutritionists advise drinking it in moderation. “Coconut water does contain calories, so shouldn’t be substituted for water or other lower-calorie drinks when trying to lose weight,” says Helena Gibson-Moore of the British Nutrition Foundation.

Indeed, the marketing of coconut water as wonder tonic and natural sports drink has been somewhat overplayed. “Coconut water isn’t the cure-all it’s cracked up to be,” concluded a 2011 report by the LA Times. Some nutritionists contest its value as a post-exercise drink, because it contains more potassium than sodium, but “we lose more sodium than potassium and coconut water cannot really replace it,” says Sue Baic, a registered dietician and nutritionist. “There doesn’t seem to be a lot of evidence to support claims for sports recovery.”

So coconut water contains some important vitamins and minerals, and natural sugars as opposed to refined ones. It won’t give you the body of Rihanna or compensate for an otherwise unhealthy diet, but if you like its distinctive, slightly sour taste then follow the advice of nutritionists and enjoy it in small quantities. It’s certainly better for you than a fizzy drink.