Posted at 19:50h in Our Drinking Water by Daniel

Chances are that by now you know just how harmful bottled water is to the planet, and yet some people still find it difficult to give up those portable, easily purchased, calorie-free thirst-quenchers. Is it really so much better for the environment to drink filtered tap water than bottled water? And is it safe?

The answer to both of those questions is–you guessed it–a resounding yes. The impact of bottled water on the environment is monumental, wracking up environmental harm from the moment the plastic bottle is made and filled to the moment the used bottle is tossed in the trash. The process of making plastic water bottles sold in the United States alone uses approximately 1.5 million barrels of oil, according to the Earth Policy Institute–that’s enough to run 100,000 cars for an entire year. And that doesn’t even take into account the inordinate amount of oil needed to transport water bottles all over the world–a bottle of Fiji water enjoyed in New York City, for example, would have traveled nearly 8,000 miles from Fiji to New York.

Adding insult to injury, most water bottles are consumed by people outside of the home, where finding a recycling bin can prove a daunting task. Nearly 80 percent of water bottles are not recycled, resulting in 38 billion water bottles clogging landfills each year where they take 700 years to even begin to decompose. 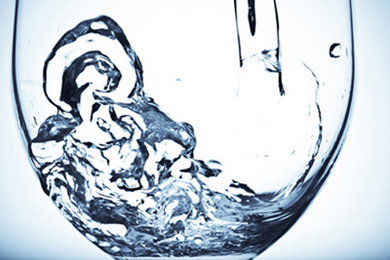 Still, bottled water is the fastest growing segment of the beverage industry, with Americans drinking an average of 167 bottles of water each year, totaling $16 billion in sales. Ironically, while the United States is the world’s single biggest consumer of bottled water, it has reliable tap water available nearly nationwide–that’s something that can’t be said of Brazil, China, and Mexico, which round out the top four bottled water consuming countries in the world. Bottled water retailers are well aware of the quality of our nation’s tap water–in fact, at least 24 percent of the bottled water we drink is actually filtered tap water. Pepsi’s Aquafina and Coke’s Dasani, the top bottled water brands in the country, are two of the brands that bottle filtered municipal water.

So why are we paying for someone else to bottle our water when we could simply filter our own water at home? Bottled water must just taste better, right? It would appear not. Good Morning America conducted a blind taste test of water using its studio audience as guinea pigs and guess which water source was the clear winner? New York City tap water. Yes, that’s right: Tap water beat out Poland Spring and Evian.

Okay, so tap water tastes the same as bottled water and is far less harmful to the environment-but is it safe? It turns out federal standards are similar for both bottled water and municipal water, which is continually tested for contaminants. And for children, tap water is more than safe—it’s beneficial: Unlike bottled water, most tap water contains teeth-strengthening fluoride. To learn about the purity of your local tap water, you can read the EPA’s water-quality reports on the agency’s website. If you’re still concerned about trace levels of contaminants, investing in a good filter for your tap water is a great, inexpensive alternative to bottled water. Storing reusable bottles, such as aluminum Sigg bottles, filled with filtered tap water in the fridge makes it easy to grab a bottle of cold, pure water when you’re on the go.